The world of Rock is filled with iconic guitars: Gary Moore/Peter Green's Les Paul, David Gilmour's Black Strat, and any guitar Hendrix ever touched. Many of these guitars that are becoming more legendary than the guitarists that played them even.
These instrument are often passed between the greats as gifts and subsequently go onto shape a whole new genre of music. One such guitar was Jimmy Page's Dragon Telecaster.
Starting life as a rather standard 1959 White Telecaster, it was used by Jeff Beck when he was playing with The Deltons prior to joining the Yardbirds to fill an Eric Clapton shaped void. Somehow he managed to convince his then bandmate John Owens to let him use it during the bands live shows, and subsequently 'acquiring' it along the way.
The story of the Yardbirds is a post unto itself but the gist is, Eric Clapton was the guitarist of the Yardbirds at the time but decided to part ways and join John Mayall & the Bluesbreakers after becoming disillusioned with the band mainstream approach to the music business, but not before he recommended Jimmy Page, a prominent young session guitarist, to replace him. Page was content with his lucrative sessions work, and worried about both his health and the politics of Clapton's departure, Page in turn recommended his friend Jeff Beck. Beck played his first gig with the Yardbirds only two days after Clapton's departure. 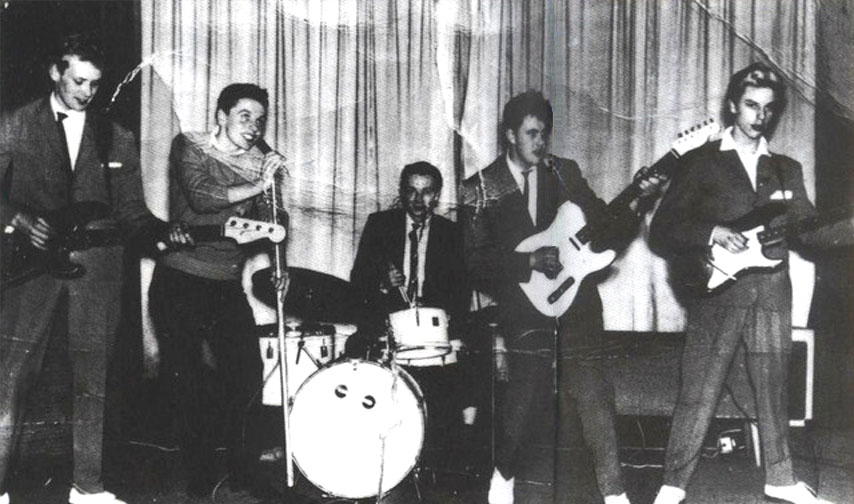 ]({static}/uploads/2019/02/The-Deltones_n5qu82.jpg) Jeff Beck (2nd from right) playing what would become the Dragon Tele in the Deltones[/caption]

Jeff used the guitar during his stint with the Yardbirds and helped the band diversify in a more psychedelic direction from 1965-66. During this time Jimmy Page helped the band out by taking on some bass duties when Paul Samwell-Smith left the band after a live show Page just happened to be attending. Beck fell ill during this period and Page took over his duties as lead guitarist while he recuperated. Upon his return, Beck resumed his role as lead guitarist and the Yardbirds were sporting what could only be described as a guitar onslaught when both guitarists were taking on lead duties.
This lineup was to be short lived as Beck left the band shortly after to pursue a solo career but gifted what would become the Dragon Tele as a thank you for giving him a break in his career.
The guitar saw use in the final years of the Yardbirds and the birth of Led Zeppelin. 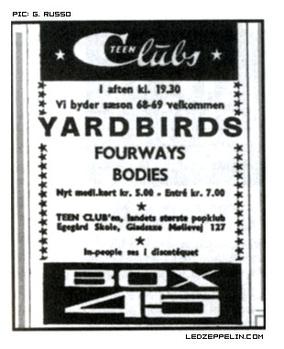 Fender have released two new Jimmy Page Telecasters, one being the Dragon and the other being the Mirror Tele based on this instrument. How have they go two very different guitars when the reality is there was only one to begin with?
Well... Sometime during 1967 Jimmy decided (and probably influenced by Syd Barrett of Pink Floyd) a white stock guitar wasn't all that psychedelic and glued small circular mirrors to the body, so when playing live it reflected light in different directions. I novel idea in the era when mirrors were fashionable but ultimately this was to be short lived, this was the first reference to a seemingly lifelong obsession with dragons, thus the Dragon Tele was born.
Stripping it right back to wood and employing his art school skills Page painted a dragon in rather vivid hues. Then he replaced the black pick guard with a transparent acrylic one and inserted a sheet of diffraction grating film, which created a spectrum of colours when hit by light.

“I really made it my own, so it was like no other Telecaster,” he said in a 2014 interview with Wondering Sound. “I felt that it was like a consecration. It’s quite a magical guitar.” 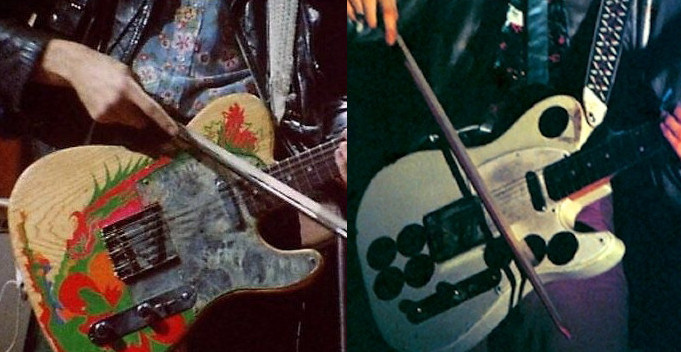 As is well known in Rock folklore, Led Zeppelin was born out of the ashes of what was once, The Yardbirds. With gigs lined up but no band Jimmy soon recruited fellow session extraordinaire John Paul Jones on bass and followed up a lead taken from Terry Reid (Jimmy's first choice of vocalist for his new project) to investigate a singer from the Black Country (Birmingham for those of you non-uk based) with Peter Grant (Yardbird manager)that was described as 'a fog horn that has learned the blues'.
Robert Plant was performing with his band, Obs-Tweedle and immediately got the gig with the then New-Yardbirds. He convinced Page to see his friend John Bonham play and the rest is really a story for another time.
Armed with his Dragon Telecaster and a new band, Jimmy Page and Co set off to fulfil the Yardbirds contractual Scandinavian bookings in September 1968.
Footage from these early days can be found but what stands out is for such a young band how tight they are and also that sound coming from a Telecaster!
The guitar was used throughout 1969-70 tours and can be heard in all it's glory on Led Zeppelin I and most famously was used for the solo on 'Stairway to Heaven'.
Sadly it's days were numbered, Page took up playing a Les Paul in 1970 (although it is unknown if they were to be used together at a later date).

"I still have it,” he told Guitar World in 1998. “But it’s a tragic story. I went on tour with (a) ’59 Les Paul that I bought from Joe Walsh, and when I got back, a friend of mine had kindly painted over my paint job. He said, ‘I’ve got a present for you.’ He thought he had done me a real favour. As you can guess, I wasn't real happy about that. His paint job totally screwed up the sound and the wiring, so only the neck pickup worked. I salvaged the neck and put it on my brown Tele string bender that I used in the Firm (in 1985 and 1986). As for the body, it will never be seen again!"

Fans of both the Dragon and Mirrored Telecasters iconic should be excited, because versions of them will actually be seen again. In celebration of Page's legendary career and the 50th anniversary of Led Zeppelin, Fender will release four artist signature guitar models throughout 2019, giving fans and collectors the chance to own a piece of history. Two models will be made on Fender's production lines, and two will be produced in the Fender Custom Shop - dubbed the "Limited Edition Jimmy Page Telecaster Set."

"Because of the heritage of this guitar, because it comes from Jeff and goes through the whole of the first first album, I thought it would be really interesting to see if Fender would be interested to do it," said Page. "I wanted to recreate the original guitar, so it would travel beyond what it originally was."

In the video below it can be seen what lengths Fender are going to, to recreate the guitar, even going as far to only choose Ash bodies that have a similar grain to that found on the original and to top it all off the Dragon tele will all feature a small bit of the artwork painted by Jimmy himself!