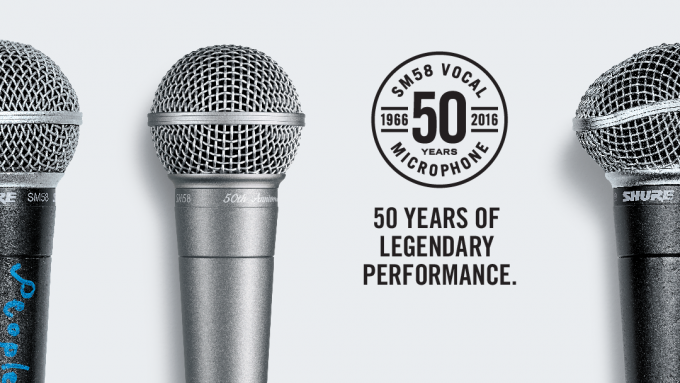 This year Shure celebrate the 50th Anniversary of the world's most popular microphone. In order to commemorate this landmark they are pleased to announce a special edition, in silver. Shure have a limited supply of this microphone now in stock, with an RRP of £99 - get your order in soon to avoid disappointment!

Celebrate the 50th anniversary of this legendary workhorse with a unique commemorative limited edition featuring an elegant silver handle. This edition marks the first time in 50 years that Shure has released a color variation of the SM58 to the public. Otherwise, the SM58-50A is the mic you know and trust: it’s the industry-standard cardioid dynamic microphone tailored to deliver warm and clear vocal reproduction under extreme conditions. WHAT’S INCLUDED

Written by Michael Pettersen This year Shure celebrates the 50th anniversary of the world’s most popular mic, the Shure SM58® Vocal Microphone. Loyal users know that this rugged and reliable mic sounds great. But many may not know some of the fascinating history and technical facts about it. #1  The “SM” in SM58 stands for “Studio Microphone.” Shure microphones had been a fixture in the public address market for nearly three decades when Shure executives saw growth potential in the radio and television broadcast markets of the early 1960s. This led to the development of the SM microphone series. The SM57 (1965) and SM58 (1966) were based on the popular Unidyne® III 545 (1959) used for public address systems. These new SM models were intended for broadcast studio use, eliminating the on-off switch and featuring a non-reflective, dark gray finish. #2  The SM58 faced extinction in 1970. A single competitor was so entrenched in the broadcast market that radio and television stations weren’t excited about the new Shure SM microphones. Sales were sluggish, and plans were afoot to discontinue the SM58 and the SM57. As a last-ditch effort, the Shure national sales manager suggested introducing the mics to live sound engineers in Las Vegas. The mics were a hit in Vegas, and entertainers began to embrace these models for live performance. As they say, the rest is history.     #3  Add a meshed ball grille to the SM57, and you have the SM58. Both models are based on the Unidyne III cartridge design developed by Shure engineer Ernie Seeler in the late 1950s. The primary difference between the SM57 and the SM58 is the grille design. The SM58 was designed for vocal applications, utilizing a ball grille that acts as an effective P-pop filter. The SM57 was designed primarily as an instrument microphone where a smaller grille size is preferred. In this application, P-pop is not a concern.     #4  You can turn it up to 11. Maybe even 12. How much SPL can the SM58 handle? At what point will the sound distort? The answer is much higher than would be safe for your ears: somewhere in the 150 to 180 dB SPL level, close to the noise level of a space shuttle launch. A well-designed dynamic like the SM58 is unlikely to reach its distortion point under normal circumstances. #5  Zero gravity is no challenge for the SM58. In a video interview with The New York Times in April 2011, a wired SM58 is floating around and being shared by six astronauts on the International Space Station. It sounded great, and it provided a testing opportunity even Shure engineers could not have performed on Earth: the SM58’s performance characteristics when weightless. #6  Ernie Seeler, the man behind the development of the SM58, didn’t like rock and roll. It’s ironic that a quiet man who preferred classical music invented a mic that would become synonymous with rock and roll, first capturing the attention of acts like The Who and The Rolling Stones. Shocked by its widespread adoption on the rock stage, Ernie Seeler said, “I love classical music, but rock and roll, I don’t take very seriously.” #7  The SM58 was born to perform. In fact, it’s practically indestructible. The SM58 has been subjected to caught-on-video tortures in a series of Shure Mike videos in which the sturdy SM58 was dropped from a helicopter, dunked in a pint of Guinness, shot with a 12-gauge shotgun, run over by a tour bus, tossed into the Pacific, grilled alongside some hot dogs, and slap-shot into the boards by the Chicago Wolves. Ernie Seeler tested the Unidyne III cartridge back in the 1960s by dropping, cooking, freezing, and submerging it. We can all thank the Shure Quality Assurance standards for its unfailing durability 50 years later.     #8  The SM58 capsule is still #1 in Shure wireless. Currently, there are fourteen microphone capsules available for Shure wireless microphone systems. They range from the affordable PGA58 dynamic element to the new KSM8 Dualdyne™. Due to popular demand, the SM58 capsule is available for every one of the eleven Shure wireless lines. #9  The internal acoustic design of the SM58 can be traced back to the Unidyne Model 55 introduced in 1939. All Shure unidirectional cardioid microphones employ the revolutionary Uniphase acoustical network that engineer Ben Bauer began developing in 1937 and used in the Unidyne Model 55 microphone (1939.) Ernie Seeler advanced this technology in the 1950s by designing an end-address microphone with an internal pneumatic shock mount, the Unidyne III. The SM58 has a Unidyne III cartridge. 10  A variety of artists have turned this mic into an icon. The SM58 has been the microphone of choice for Roger Daltrey, Paul McCartney, Henry Rollins, Patti Smith, Alice Cooper, Buddy Guy, Cheap Trick, G. Love, Martina McBride, Megadeth and countless other musicians. In fact, it would be difficult to name a major entertainer who has not used the SM58 at some time in their career.   Final thought: The Shure SM58 has become the touchstone for a professional vocal microphone, perfect in form, function, and feel. For many musicians, it is the only microphone needed for their entire career. Everywhere people make music, and for almost as long as music has been amplified, the SM58 has been “what you sing through.” If any product has ever earned the title of “worldwide industry standard,” surely the SM58 is it.