The new product announcements are beginning to ramp up in anticipation for the imminent NAMM 2013 show and IK Multimedia have just announced a new Bluetooth MIDI pedal for iPhone, iPad and Mac: the iRig BlueBoard. This handy little gadget allows for hands-free operation of your music apps, allowing you to gain far more control over your performance than was previously possible.

The iRig BlueBoard can be configured to control most MIDI-compatible apps, including IK Multimedia's popular AmpliTube amp-modelling app. Using the BlueBoard you can switch presets, change patches, toggle effects and more, and because it's all wireless, you don't need to worry about getting tangled up in cables! Thankfully setup is also extremely simple; just turn the iRig BlueBoard on and set it up to control whatever you want! 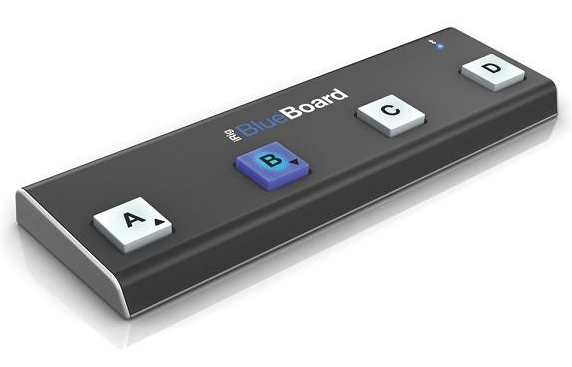 The BlueBoard features four backlit pads housed in a sturdy chassis, so you have no need to worry about taking it on the road. It also features two TRS jacks for connecting additional MIDI controllers (e.g. expression pedals). The iRig BlueBoard runs on four AAA batteries and can control your device from up to 10 metres away!