So, what are these strange-looking toasters you might ask? Well, they are in fact Yamaha's unique range of practice amps. They offer cutting-edge technology, ease-of-use, retro looks & a whole host of useful features. If you're looking for a strictly at-home amplification solution then do read on... 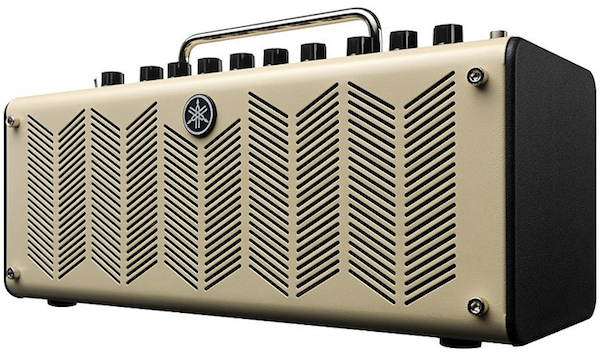 When the Yamaha THR series first hit the market back in 2011, everyone seemed positively smitten with these non-assuming little amplifiers & for good reason, as Yamaha had basically re-imagined what a practice amp could be. They felt that there was very little out there catering to the more seasoned player (as practice amps tend to be aimed at the beginner market for the most part these days) & with this in mind, they billed their new THR amps as the guitar player's 'third amp'. The principle was that you might have your big stage rig & possibly your smaller rehearsal/pub-sized combo, but what about a decent 'at home' solution? It was a clever point to make; however, with pretty little enclosures; a small, lightweight footprint; multiple tonal options; in-built tuner & effects; the option of battery-powered operation & a relatively low price-point, these little amps certainly do serve to meet the needs of both beginners & advanced players alike!

The original lineup consisted of the THR10 & the THR5; however, in October of 2012 Yamaha expanded the range with the addition of the THR10C, THR10X & THR5A (all of which serve to focus more specifically in terms of their tonal options). All of the models feature the same technology under the hood &, with the exception of the THR5s, the features remain consistent across the board.

The THR range features Yamaha's 'Virtual Circuit Modelling' technology, which essentially takes digital modelling past what we've come to expect by replicating old valve circuits right down to signal path & component level (much the same approach as can be found in high end modellers such as the Axe-FX). In fact, Yamaha were well ahead of everybody else in this game, as they were doing this back in the 90s with their DG series of amps (before the Line 6 Spider even came out that is)! The DG line of amps were used extensively by some of the worlds most respected artists (Richie Kotzen, Ty Tabor, Greg Howe, Frank Gambale & Allan Holdsworth all spring to mind) so, for digital modellers, these amps have about as good a heritage behind them as you could possibly get. The idea behind this technology is to give users the sound & feel of large tube amps, but at low house-friendly volume levels. Yamaha have also gone to great lengths to ensure that the controls respond the same way as they would on a tube amp as well, thus ensuring that things function the way guitarists have come to expect.

The THR series amps can be powered with the included power supply, or with eight regular AA batteries. They feature inputs for guitar, headphones & auxiliary devices, plus a USB jack on the back.

When connecting to your computer via USB, the THR has the ability to be used as a basic audio interface (a copy of Cubase AI is included in the amp's box). This allows you to both record directly into your computer & use the amp for playback of your audio files. Yamaha also provide a free 'THR Editor' application via their website, which allows you to tweak & store a library of settings for the amp via your computer should you wish.

From left to right, the controls on the THR10s appear as follows: 'Amp', 'Gain', 'Master', 'Bass', 'Middle', 'Treble', 'Effect', 'Dly/Rev', 'Guitar Output' & 'USB/Aux Output'. The 'Amp' knob allows you to select the specific amp model you wish to use & the subsequent controls allow you to dial in the tone to taste. Once you've found the sound you want, you can then save it to one of the amp's 5 preset slots by pushing & holding the associated button.

The really great thing about how these amps operate is the result of the additional output controls; you can essentially find your sweet-spot by balancing the gain & master levels, much like you would on a tube amp, but then control the output volume separately without any tonal alteration (genius). You also have a separate knob for controlling the output volume of whatever is connected to the USB or auxiliary inputs (which is real handy if you wish to play along with your iPod or what have you).

The on-board effects have been conveniently split into two, with one knob for delay & reverb & another for modulation & trem effects (this is handy as it allows you to use reverb or delay at the same time as the more extravagant effects). There is also a Tap tempo button for the delay, which doubles to activate the built-in chromatic tuner if pushed & held for a second.

The THR5s feature a very similar layout, save for a single tone knob in place of the THR10s' three band EQ & the lack of a level control for connected auxiliary devices (plus, the selection knob on the THR5A is labelled 'Mic' instead of 'Amp' & its 'Gain' knob is labelled 'Blend/Gain'). It's also worth noting that the ability to save presets doesn't appear on the THR5s either.

Now, this is where the THR10s all start to deviate & the correct model for you will depend on your tastes. Personally, my favourite of the bunch is the standard THR10 as I found it to be the most varied in regard to the sounds on offer; however, the THR10C, the THR10X & the THR5A may be better suited to you if you're after more of a specific focus. The THR10C features more in the way of classic sounds, the THR10X is aimed at high-gain enthusiasts & the THR5A is specifically for electro/acoustic applications. Do bear in mind though that there is a certain amount of crossover between the models & it's not to say that you can't get clean sounds out of the THR10X or gainy sounds out of the THR10C (it's all really a matter of which you'd rather have the more choice of). Let's take a look at these in a little more depth...

The sounds on offer here are 'Clean', 'Crunch', 'Lead', 'Brit Hi', 'Modern', 'Bass', 'Aco' & 'Flat'. The 'Clean' setting is based on a Fender-style 6L6 loaded amp & features rich, squeaky clean tones with plenty of headroom; 'Crunch' is a low-powered class-A combo much like a Vox in nature; 'Lead' gets you into Marshall Plexi territory with its low gain front end & EL34 power section; 'Brit Hi' would then be your Marshall JCM800 with its higher-gain preamp; 'Modern' is in the realms of a 6L6 Mesa Boogie-style amp with tons of distortion & compression; 'Bass' is optimised for bass guitar & seems to be modelled on an all-tube Ampeg-style amp; 'Aco' features a microphone simulation optimised for acoustic guitar & 'Flat' has a flat response clean input for plugging in non-guitar sources.

In terms of effects, the THR10 has Chorus, Flanger, Phaser & Tremolo available on one knob & Delay, Spring Reverb, Hall Reverb & a Delay/Reverb mix available on the other.

This time we have 'Deluxe', 'Class A', 'US Blues', 'Brit Blues', 'Mini', 'Bass', 'Aco' & 'Flat' on offer. 'Deluxe' offers the same sound as the 'Clean' setting on the regular THR10, 'Class A' is the same as the THR10's 'Crunch', 'US Blues' gets you in the territory of a small open-backed American combo with a touch more hair than the typical Fender affair, for 'Brit Blues' think Marshall Bluesbreaker & 'Mini' has the feel of a baby Marshall with a 2x12 cabinet ('Bass', 'Aco' & 'Flat' are all the same as found on the standard THR10).

Effects wise we have the same as the standard THR10, save for the fact that the delays are replaced with an emulation of a Tape Echo instead. 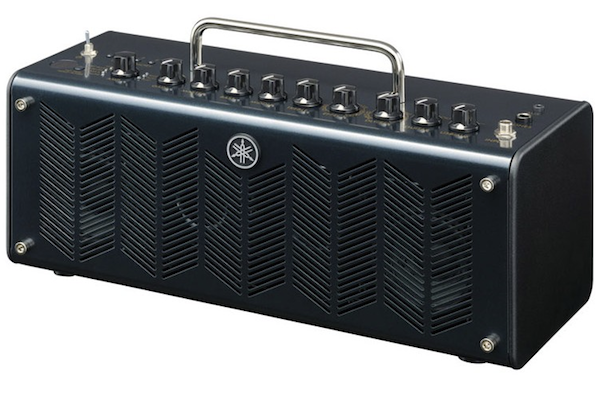 Effects are the same as on the THR10.

The THR5 features the same sounds as the standard THR10; however, the 'Bass', 'Aco' & 'Flat' settings have all been omitted. It is also worth noting that the THR5 is lower-powered & therefore does not have quite as much volume on tap (there is also less in the way of bottom end due to the smaller enclosure).

Effects are the same as on the THR10.

Here the options are 'Condenser', 'Dynamic', 'Tube', 'Nylon' & 'EG Cln'. 'Condenser', 'Dynamic' & 'Tube' are all emulations of the named microphone styles, 'Nylon' is optimised for use with a classical guitar & 'EG Clean' features the same sound as the 'Clean' setting on the THR10. When using a microphone type as your selected sound, the gain knob works as a blend control for setting the desired amount of mic simulation that you wish to blend in with the direct pickup sound from your guitar... a clever little feature indeed!

The effects on offer here are: Compression, Chorus & a Compression/Chorus Mix on the first knob; Delay, Hall Reverb & Delay/Reverb mix on the second.

Well, unlike a lot of digital units, these amps are both enjoyable & simple to use. I really like the fact that Yamaha has focused on using digital technology to achieve what guitarists generally want from a practice amp (rather than the convoluted everything-and-the- kitchen-sink type affair that you find with other amps of this nature). The THRs truly are plug & play & dialling in your desired tone is just as simple as on any comparable analogue amplifier, plus there's no editing screens to scroll through, there's no crazy effects that make your guitar sound like it's from Mars & there's no silly patch names like 'Insane' or 'AC3C' or whatever... these are all good things for sure!

Sound-wise, okay, they’re not Handwired Marshalls or Vintage Reissue Fenders (but you wouldn’t really expect them to be in all honesty)! I can't help but feel that the THRs are more reminiscent of decent analogue practice amps such as Marshall MGs & Peavey Bandits than they are of the modern digital modelling brigade (which is a very good thing if you ask me). They feature a greater variation of sounds than their analogue counterparts mind you & these sounds do successfully capture the spirit of the bigger amps we all know & love, plus, they're certainly more feature-laden.

The small retro enclosures look far nicer sitting on a suitable piece of furniture than the typical carpet-riding black box that we've come to know & expect (although this may be a matter of taste) & the faux tube glow that ensues when you power the amps up adds an amusing pantomime feel to the whole affair... I want one for my kitchen dresser!