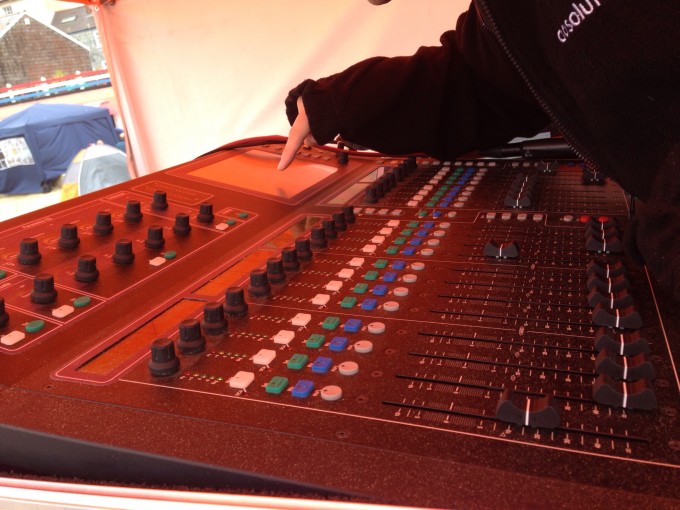 We took an Allen & Heath GLD system for a spin at the Guitars On The Beach festival in Lyme Regis. It may have rained for most of the day, but the sound was awesome. So what did we use for the job, and how did it fare?

The setup was an Allen & Heath GLD80 digital mixer with a GLD-AR2412 Main Audio Rack and an AB168 Portable Audiorack, plus a RCF 20kW line array. Being an open-air event we needed a good dose of power, so our RCF rig was essential on this occasion!

The GLD system is ideal for this kind of event, with lots of acts and short changeovers. All mic’s and DI’s connect to the AR2412 and AB168 Audioracks on stage, which convert the analogue signals to digital inside the stage boxes themselves. This digital audio is then fed to the front of house mixer via Ethernet cables - so no big and heavy analogue snakes! Bonus. 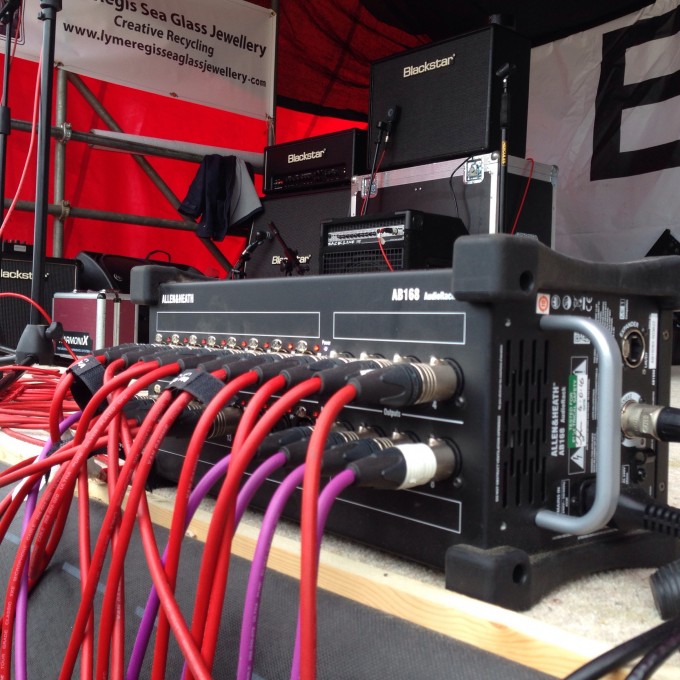 Another great thing about this system is the provision for iPad control. Monitor mixes can be created remotely on stage using an iPad wirelessly connected to the GLD80. This is not only convenient, but it keeps the cost down as a second monitor mixer and analogue splitting of signals is not required.

The AR2412 (24 in / 12 out) took care of speakers, monitors, and one set of inputs, while the AB168 gave us another 16 inputs, and 8 additional outputs should we need them. Each input is named so that channel identification is easy, and these names propagate to the iPad app, making both FOH and monitor mixes a breeze to set up and tweak. 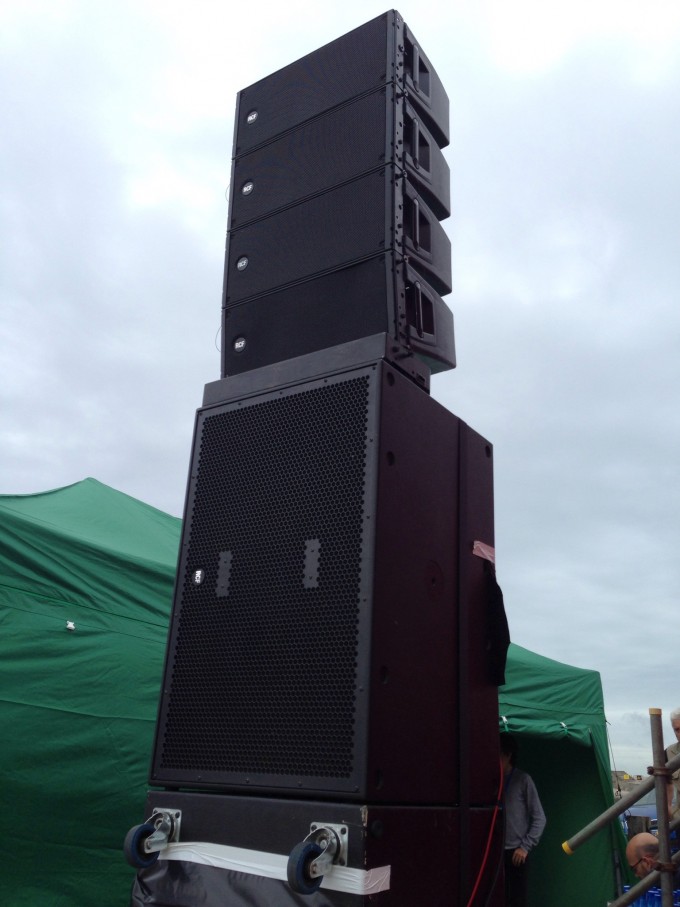 The AR2412 had all the drums, backline amps, radio mics and drum fill connected, with an AB168 at the front providing inputs for wired vocal mics, and acoustic DI's, meaning performers could just connect their guitars to a socket right in front of them. We also fed the centre fill outputs here as they were so close, and the monitor outputs for the front of the stage. All this connected to the mixer via just one piece of Cat5E to the mixer via Allen & Heath's DSNAKE protocol, which gives up to 48 input channels and 20 outputs. We ran a second CAT5e cable from the mixer's ethernet port to a wireless router on stage to have a secure and reliable wireless connection for our monitor engineer to be able to connect his iPad to, so he had complete control of every monitor wedge at all times. 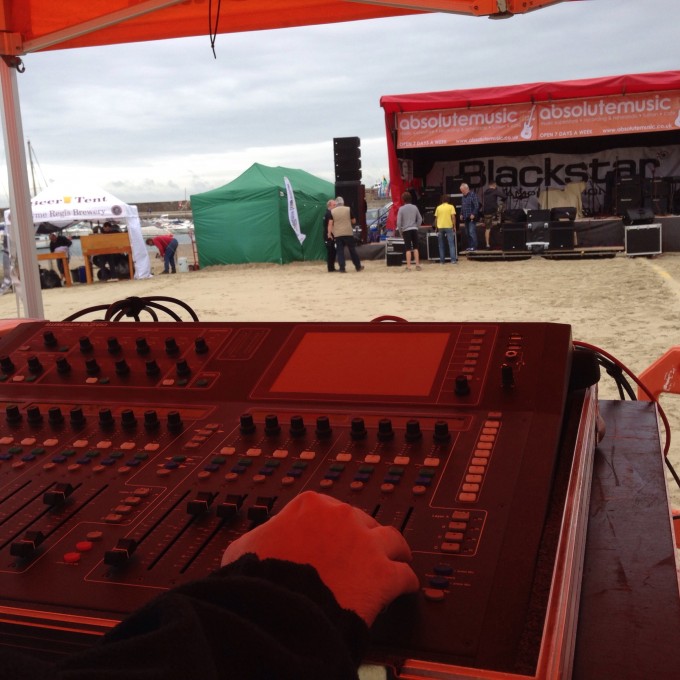 Because the GLD mixer allows you to put any input, output, group, DCA, or FX channel anywhere on the surface, it makes it a really flexible solution for this kind of work. I've got a layer of drum channels, instrument channels, and vocal channels, with a 4th layer where I can put anything that shows up on the day, or put everything that's being used for a particular band so it's in exactly the right place under my fingers. Every channel has a fully parametric EQ, Compression, and with 8 Effect engines on board, there's room to have plenty of different textures available to suit whatever song should come up next. The other challenge running so many speaker stacks and fills is time aligning them all so that everything is in phase and sounding just right whether you're 5m in front of the stage or 50m behind the mix position. The GLD allowed us to do this really simply as it features delay functions on every single output, measured in either distance, samples or time (measured in milliseconds).

We’ve been using RCF DLine loudspeakers for some time now and are very happy with their performance. In this instance we used two ground stacked arrays comprising four HDL20As atop a SUB8006AS/SUB8004AS cardioid subwoofer setup as the main system, along with a HDL10A atop 3 x SUB8004AS as a centre fill. A further three HDL10As were flown behind the FOH position as a delay stack, the objective not being one of overall volume, but to maintain the fidelity of the system in what was a fairly windy environment. The coverage was consistent over an area that could easily have held 3000-4000 people.

The DLine boxes all have built in amplifiers and DSP, so can be configured very quickly with buttons on the rear panel. Unlike a lot of products at their price point they have versatile rigging hardware, so can be used in a variety of ways, from a single box per side up to hangs of sixteen boxes. Setup and breakdown are both straightforward and quick, which when you’re on a beach in the rain is a definite bonus! Speaking of rain, the weather-proof covers certainly got a proper test on this event and passed with flying colours! 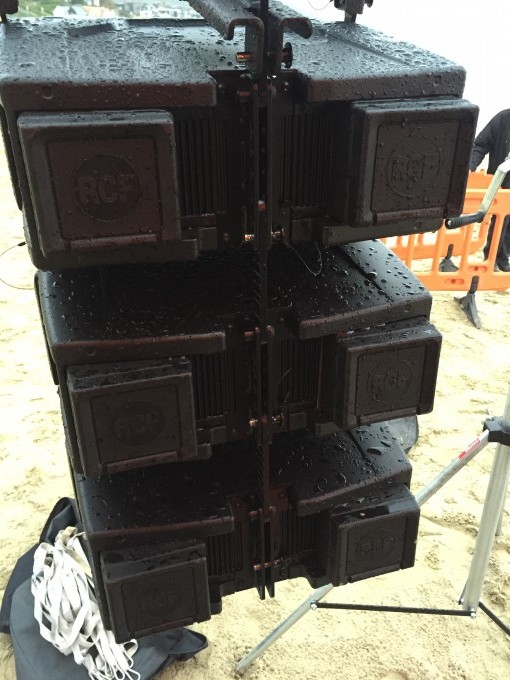 The sound was great, and the monitors were great. Testament to this were the many favourable comments made by audience and performers alike. All in all, a great day, and a great test of the Allen & Heath GLD system. It gets full marks from us!