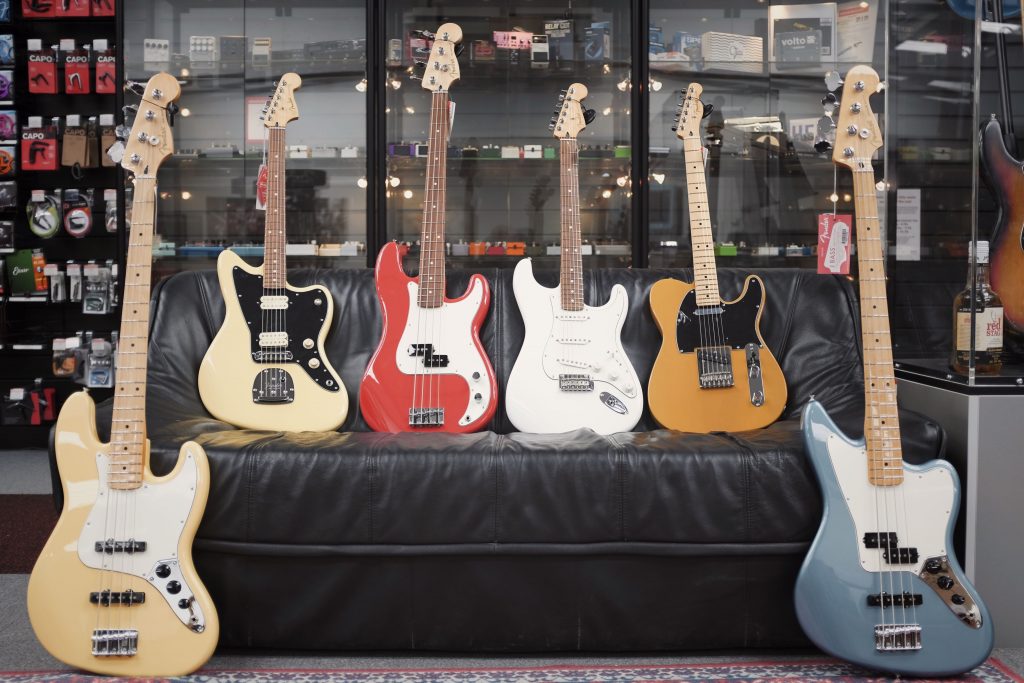 A new range of Fender Player guitars has been announced and today is the day they are released into the wild ready to be melting the faces of audiences all over the world!

This new range will be a direct replacement the outgoing Fender made in Mexico Standard series guitar. So gone are all the ‘standard’ series guitars from both Fender’s US and Mexican ranges.

It’s more than just a name change though, there is more going on than meets the eye. Let’s continue on the visual theme for a minute, the first thing many of you will notice is that they have changed the logo to what has become to be affectionately termed the ‘spaghetti logo’ on the headstock and also moving the serial numbers to the rear of the headstock. To many this is a vast improvement as visually it looks in line with Fender’s US line of guitars, and let’s face it, as a whole us guitarists/bass players are a bit of a shallow bunch when it comes to our instrument’s origins.

Another big thing that causes much debate is the colour of guitar, this is very subjective but they seem to have catered for most tastes in this respect. They have an assortment of solid colours such as Sonic Red, Sage Metallica Green, Tidepool, Buttercream, Black and of course the classic 3-Colour Sunburst. The aptly named is the Polar White as it is the most polarising (see what I did there?) of the lot. We are talking really white! We will let you be the judge of that though as beauty is in the eye of the beholder and all that.

The next thing to note is that the Startocaster model has undergone a subtle but essential upgrade, this is something that in my opinion really makes the playability of the instrument much better than the outgoing Standard, and that upgrade is the wiring. I know not very glamorous, but having played this guitar I can safely say that the bridge pickup no longer removes your eardrums when engaged! In fact they have even gone as far to wire it to a tone pot. Coming from the world of Custom Shop Strats this simple but often overlooked change in the electronics is just a great addition. The pickups themselves across the whole range have undergone a spec change also, they are loaded with alnico IV magnets. These were often used in vintage pickups from the 50s so deliver clarity but with no lack of punch.

Neck profiles have stayed much the same as they have gone for  the ‘if it isn’t broken, don’t fix it’ approach but I did notice it was slightly fatter when accessing the upper frets.

Lastly they have upped the spec somewhat for the actual hardware throughout the range. On the Strat there is an updated 2-point tremolo design with bent steel saddles that provides a smoother travel when playing and rock solid tuning stability due to the fact that there's less friction against the posts. The Telecasters have been given the same love minus the floating trem of course. The biggest change goes to the Jazzmaster and Jaguar sporting a 6-saddle vintage style adjustable bridge with a floating tremolo piece so you can make those subtle bends and expression to your sound.

All in all this is more than the marketing department of Fender needing to justify their jobs, this is a solid update to what is probably the most purchased guitar series in history.